When your child is diagnosed with a specific learning disability, or you suspect a disability of some kind, many words are thrown at you.

Until you familiarize yourself with the various conditions, their symptoms, and their connection to each other, your child can be incorrectly categorized. Such as with hyperlexia, autism, and Gestalt Language Processing.

Many people are familiar with dyslexia. Now, let me introduce you to hyperlexia. And some other behaviors that often accompany autism and other learning disabilities.

Hyperlexia has been referred to as “reverse dyslexia.” The child is excellent at decoding but terrible at comprehension. Other entities refer to it as a “savant-like behavior.”

While many IEP teams may characterize these behaviors as just a ‘quirk,’ they often have their own name, list of symptoms, and specific interventions.

Many people have heard the term dyslexia, but hyperlexia is starting to get attention. Let’s start by breaking down the word hyperlexia.

Merriam-Webster is always a great place to start for definitions.

Begin with the prefix hyper, which means above or beyond.

And now add that -lexia, which comes from the Greek word lexis, or word or speech. Put it all together, and you’ve got a hyperinterest in words.

A child that seems more interested than their peers or possibly overly interested in letters and words before and during acquiring speech and language recognition could possibly have hyperlexia.

For example, a child could be overly interested in letters, lining up letters and words but not fully grasping their meaning or utilizing them appropriately for receptive and expressive speech.

According to Science Direct: Hyperlexia is defined as the co-occurrence of advanced reading skills relative to comprehension skills or general intelligence, the early acquisition of reading skills without explicit teaching, and a strong orientation toward written material, generally in the context of a neurodevelopmental disorder.

Unlike a child who is a gifted reader, a child with hyperlexia will have communication or speaking skills that are below their age level. Some kids have hyperlexia in multiple languages but have below-average communication skills.

Hyperlexia was coined in 1967 and is typically characterized by four features. These include having advanced reading skills, learning to read early without being taught, having a strong preference for letters and books, and having an accompanying neurodevelopmental disorder.

What is Gestalt Language Processing?

Next, what is Gestalt? Gestalt is a term from the psychology world, “an organized whole that is perceived as more than the sum of its parts.”

Gestalt processing is basically the “chunking” of information. The gestalt-processing child will understand language in chunks. They must be taught to break it down into individual words.

It will take time to break down what a flower is; some are pretty, some are not, etc. A Gestalt language processor has difficulty separating out the words in a sentence.

Gestalt processors often use echolalia as their speech pattern. You can learn more about echolalia and scripting in that article.

The differences between hyperlexia and Gestalt language processors are subtle, and it takes a trained eye to see them in a child. This is why proper assessments and evaluations are critical.

As always, go with your gut, parents, and ask for an IEE if you disagree with the school district’s assessment of your child.

Gestalt Language Processing is characterized by having extreme difficulty understanding and processing verbal language and a tendency to focus on nonverbal communication when reading aloud.

These symptoms may be present in children with an ASD diagnosis or other neurological conditions such as epilepsy, brain tumor, Tourette syndrome, and more.

Darold Treffert is one of the leading experts in this country for hyperlexia. He defines 3 kinds of Hyperlexia.

While not exclusive to autistics, many autistics are hyperlexic. A 2017 study says that of all hyperlexic children, 85% of them also have autism.

Ironically, this language processing disorder that is often highly indicative of autism is often the trait that prevents them from being seen as autistic.

Because hyperlexic children learn sentences easily, and often before they learn individual words, they are often highly verbal and speak more complex concepts than their age peers.

Reading comprehension disorders can manifest due to other factors in a child’s skills. The study then examines individuals with and without Autism and the prevalence of hyperlexia.

It’s important to know the difference between autism and Gestalt, or gestalt language learners. With autism, there are specific symptoms that children display.

These symptoms may include difficulty with social communication, repetitive behaviors, and a lack of social reciprocity.

With gestalt language learners, it can be more difficult to pinpoint the exact cause of their condition because there are no definite signs.

Gestalt language learners often have difficulty reading comprehension but excel in math and other spatial tasks.

They tend to be able to process information visually through photographs or diagrams instead of text-based information or speech.

There is a lot of confusion around these two terms because they are not always interchangeable.

However, if you suspect that your child is struggling with learning disabilities, then it’s important for you to ask your pediatrician for the next steps, as well as ask your school district about IEP evaluations.

Hyperlexia is a specific language learning disorder that impacts children’s ability to learn and process language.

Hyperlexia differs from autism because it does not impact communication or social interaction but rather learning and processing language. While adults may see a lack of social interaction, this is due to language learning deficits and not social skill deficits. I hope that makes sense.

In other words, if you force a child to participate in forced social situations, you haven’t addressed the core problem. And that is, the child lacks the language skills to have meaningful social communication.

Hyperlexia by itself is not in the DSM. It is listed under autism as an autistic trait.

Some ways to tell if your child is a gestalt learner or has hyperlexia:

It is highly recommended that a certified speech-language therapist see the child for a full evaluation. It will be then that strategies can begin to be implemented for success.

Early intervention is so important in finding the path to success for these amazing kids!

A child can have any of these, any two of these, or all of these. Having one does not guarantee or negate having the others.

And while closely related with many overlapping characteristics, you want to ensure you are targeting the right condition with the right interventions. 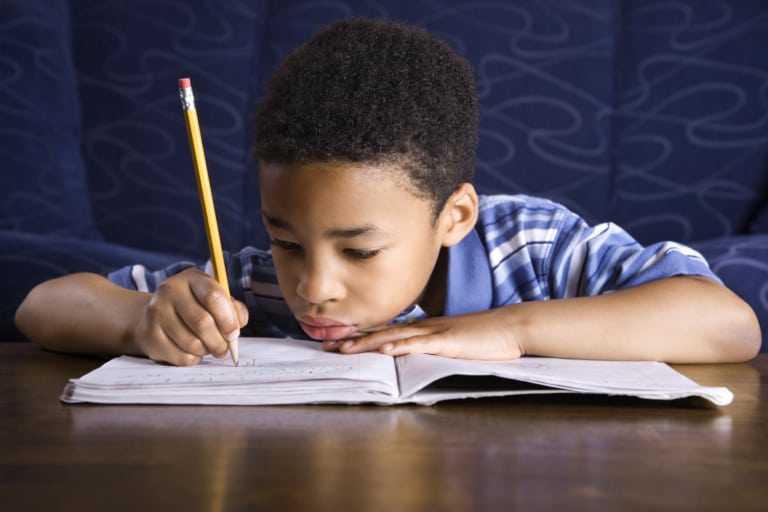 3.9K Shares 85 56 7 2.8K More IEP Goals for Writing Parents can certainly assist the IEP team with developing goals. One IEP area that I find parents and teachers struggle with is addressing the skill of writing. And by writing, I’m talking about content, not fine-motor handwriting skills. If your child struggles with handwriting,… 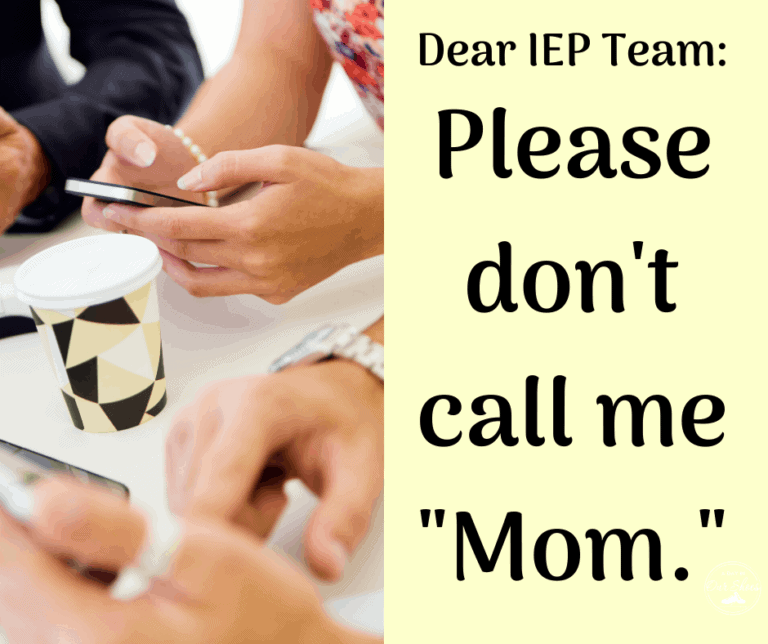 4.1K Shares 11 6 4K More IEP Mom “No one can make you feel inferior without your consent.” Eleanor Roosevelt (supposedly) History (and Google Analytics) tells me that if you are reading this post, there’s a greater than 96% chance that you are an IEP Mom. Hey, we have to stick together, right? So do…

3.2K Shares 8 2.7K More The school called CPS on me! Sometimes I hear the stories and think “How, how did we get here?” And, many times I’ve seen a parent seek assistance and many parents chime in, “That’s illegal, they can’t do that!” Sigh. I wish it was that simple. Yes, it is illegal….

669 Shares 253 More Assistive Technology in the Classroom Before I rant about this (mostly kidding!), let me back up a bit. A while back, I did a post about IEP Thought Hurdles. I think it’s a really good post, but it never got the traction I thought it could get. That philosophy definitely applies… 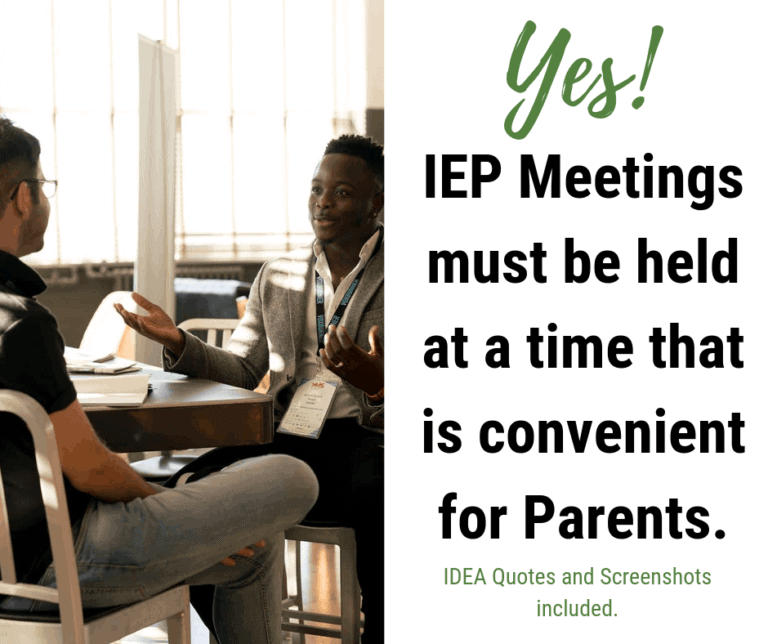 4.9K Shares 6 4.7K More What does IDEA say about parents attending IEP meetings? Whew, can we please put this issue to bed, once and for all? Because I have had it up to here (I’m pointing to my forehead, lol) with schools telling parents that “we only have IEP meetings at 7 or 2.”…

557 Shares 119 More When your IEP Meeting is Tomorrow This was in an email I opened this morning: “Hi! I have my IEP meeting later today, please send me any advice you have that you think might be helpful. Thanks.” Now, this is not an unusual email. Actually, several times a week, either via…