A skill that IEP Moms need to learn.

I don’t have many clients that I have to “fire” but it does happen. Several years ago, I was assisting a family who needed help. I won’t go into all the details of their situation. But, the IEP was not adequate, and the parts of it that were appropriate were not being followed consistently. Not an uncommon story, right? But in addition to getting the IEP fixed for the child, there had also been a minor incident. It involved the teacher making an odd remark to the child.

It was along the lines of, “Oh, tell your parents they shouldn’t have done that!” when he had shared something with her. For the most part, as part of the bigger picture….sure, it was an unusual thing to say. (Due to client confidentiality, I cannot give more details than that.) She (teacher) had jotted down in the communication book an apology.

Well, mom would NOT let it go. During IEP meetings, with the said teacher not present, she would get upset and say, “I just want to know WHY she said that to him.”

We even went to mediation, and she did it again. “I want to know WHY she said that.”

After (successful, I might add) mediation, I went home and sent them an email telling them I could no longer be the advocate for their family.

Why did I do that? I’m glad you asked.

And moms, you’ve got to try to turn that thing off inside of you.

Why? Because it’s irrelevant. You are focusing on (assumed) intent instead of focusing on facts.

In the case above, this particular mom was so focused on the why, she lost focus on what her child’s needs are and if they were being met. Instead of working with the team and the mediator to get a solid IEP for the child, she just kept rehashing this one incident and demanding to know why. I cannot and will not work with a parent who isn’t willing to move forward.

She even said, “I just cannot move on until I know why she said that.” Extreme? Absolutely. Mind you, I didn’t just instantly fire her. For weeks I had been asking her to please let it go, as it was months ago and it was no longer relevant and that she had, in fact, received an apology.

As Elsa would say…Let it go.

If it’s not relevant, you don’t need to know.

Let me give you another example. In the Facebook group, a mom asked what to do. She had given her work e-mail address to the teacher, and despite repeated requests to not be e-mailed at work, it was still happening. Many jumped in with valid advice from going to her supervisor to the IT person and so on.

But one mom chimed in, “Why did you give her your work e-mail?”

5 Things every Parent MUST DO in the IEP Process.

How to write your Best Ever Parent Concerns Letter.

Now, my goal here isn’t to make that person feel like garbage or shame them. It was just a really good example of how the WHY doesn’t matter. Because it doesn’t. It is completely irrelevant why she gave her work e-mail to the person, as that is not going to move this situation forward.

Whenever Moms discover that they’ve been given misinformation, I often hear “well WHY would they tell me that if it’s not true?”

None of us has time to ponder the motivations of others. We just don’t. And, trying to do that is a waste of time, energy and a distraction from our real purpose–get our kids’ needs met.

This past week, I have heard from several moms who were given misinformation about how long they have to review and return the IEP. While none of these moms asked why, several others had reasons to give. “They don’t want you to have time to read it” or “They are trying to rush you so that you won’t ask for more.” “That’s why you were told the wrong information.” Oh really?

Focus on the facts, not presumed/assumed intent.

Think about our recently elected President and all of his antics. Why did he do that? Why did he tweet that? Why does he say that when he’s got to know we can fact check him? Why, why, why…..

I’ve not always been at this stage of IEP enlightenment. I had a mentor who introduced me to the concept of Hanlon’s Razor. I’ve read several articles on the idea, that linked one is my favorite. It is so applicable to what we do in the IEP process, which can be brutal. See what happens when you assume?

Hanlon’s Razor is an effective check on a tendency that we humans have: to quickly judge that something bad that happens to us is the result of an intentional evil action. This kind of thinking is mistaken for 2 reasons: 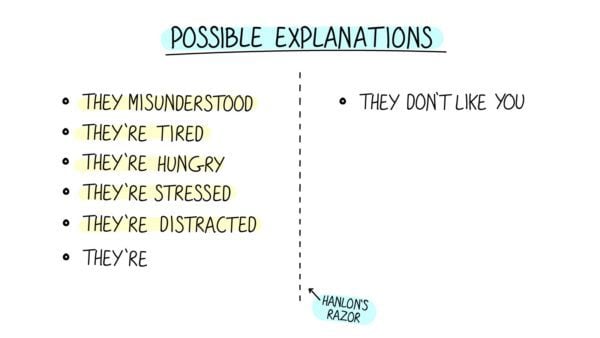 The more you can avoid jumping to conclusions in your thinking, the better off you will be. Hanlon’s Razor is but one reminder of one species of overreaching we do in our thinking. Being restrained in judgment and action will pay off in the long-run. You will tend to let emotion enter into your decision-making less often.

Trust me on this one. Once you can make peace with yourself and give up these WHYs, it allows you to focus better. I get it–someone has lied to us or wronged our kids, dammit we want to know why! But we never will. Even if they tell us, we don’t know if it’s true. So I choose to focus on what I can control.

Remember, no one ever calls an advocate when things are going great. I only hear from families who need help, and often we hear the most desperate and worst cases. I’ve seen some horrible things happen. And that’s why I had to make a conscious decision to take Elsa’s advice. Otherwise the WHY can consume you and prevent you from success.

Next time, instead of allowing your brain and your effort to go to the why…get the facts. Get the policy, get your next steps. Instead of asking yourself “why?” ask yourself, “What can I do about this? What am I going to do about this?”

Action steps, not why.

What are you looking for?