Can you (audio) record your IEP meeting? It’s a question that I’ve seen parents and advocates discuss quite a bit. And like all the other parts of the IEP, there are no easy answers to the question. In deciding whether or not to record your child’s IEP meeting, there are many different things to consider.

Here is a list of some of them, and I asked around in the Facebook group and my advocate friends. Some of their answers surprised me and some changed my mind a bit. Prior to doing this post, I was pretty much on Team No, don’t record. I’m still on Team No, but now it’s more of Team No, but…..there are always exceptions.

Should parents record an IEP meeting?

There are two main things to consider when deciding to record your IEP meeting, as far as negative repercussions. One is breaking the law and the other is throwing a wet blanket over your relationship with your district personnel. The benefit, of course, is that you will have everything that is said during the meeting to review at a later time.

Check recording laws and policies. This is important. Different states have different laws regarding recording others. In some states, all parties must agree or you cannot do it. In other states, you don’t even have to inform the other parties that they are being recorded. It varies. Also, your school district may have it’s own written policies about recording meetings and other school happenings. Yes, policies can be overridden and a state law overrides a district policy, but you still want to be prepared for anything the day you walk in with the recorder.

If you are a two-party consent state, do not “do it anyway.” The school can have you cited/arrested for this if your state’s laws do not permit it. Think your relationship with the school was bad before? Ha! Wait till they have you arrested for secret recording. I have much more guidance on the legality of this below. (though it’s just food for thought, I am not a lawyer!)

Federal law does not prohibit a parent or school official from recording IEP meetings. State departments of education or school districts can require, prohibit, limit, or regulate the use of recording devices at IEP meetings.

However, if a district has a policy that prohibits parents from recording IEP meetings, that policy must include exceptions to ensure that parents understand the IEP.

OSEP has stated that because federal statutes do not explicitly authorize or prohibit the recording of an IEP by a parent/guardian or school personnel, the state educational agency or other public agency has the option to “require, prohibit, limit, or otherwise regulate the use of recording devices at IEP meetings.” That quote is from the OSEP Guidance letter provided below.

OSEP also provides some protections to parents/guardians who wish to record IEP meetings:

If a public agency has a policy that prohibits or limits the use of recording devices at IEP meetings, that policy must provide for exceptions if they are necessary to ensure that the parent understands the IEP or the IEP process or to implement other parental rights guaranteed under the Individuals with Disabilities Education Act. A SEA (state education agency)] or LEA (school district) that adopts a rule regulating the tape recording of IEP meetings also should ensure that it is uniformly applied.

Here is the OSEP guidance letter about recording IEP meetings.

You can check out the recording laws here: Recording Laws for all 50 States.


My friends Sandra and Judi summed it up very well for me, as far as needing to record an IEP meeting as an accommodation:

YES!!! it was so hard BEFORE my stroke to remember what is going on in the meeting, what was said, and then attempting to prove it later. I asked for accommodation ahead of time. Unless there are three people at the meeting, the parent, the advocate, AND a note taker, I think recording is imperative. There is so much emotion involved in an IEP meeting, on both sides of the table. I have found since recording I can concentrate better on what people are saying in real time, because I’m not rushing to commit it to memory in case I forget later, and I agree with Judi that it can alter the atmosphere, but for me, in a good way, because people have been nicer in word and tone. Whatever benefit you are risking by recording I think pales in comparison to the benefit you are gaining.

Some of the points that were made at meetings in my school district as they were developing their policy was how difficult it is to both take notes and fully participate in a discussion. It doesn’t matter if you have a ‘disability’ that you’re dealing with or not. If you’re not practiced at doing this I feel you’re at a disadvantage – and parents don’t go to as many IEP meetings so they don’t have the practice with this skill set that school district personnel get.

Ask yourself if there are other solutions besides taping. Maybe you don’t want to take this step just yet. Take a friend, your sister, sister-in-law, cousin, partner with another parent in your district and attend each others’ meetings. Have one take notes so that you can participate. Within 24-48 hours of the meeting, send a follow-up email to the Special Ed Director while you are waiting for the final IEP draft. “I just wanted to follow up with you regarding my son’s meeting, a lot of information was said and I want to make sure we are all on the same page. We agreed on the following items (list them). For me, as a parent as an advocate, this is the preferred method. It’s more collaborative and doesn’t put people on the defensive the way taping does. If it works, I would recommend this approach.

What do you hope to gain by taping? Maybe your team really is hostile and nasty to you. That’s certainly not unheard of, and I’ve seen it myself. In that case, the recording might help. Another common parent issue is that you want to ask your district for something big (new placement, 1:1 para and so on) and you anticipate them saying “no” so you want to have it on tape. Or, you think that maybe you’ll better your chances of them saying “yes” because you have them on tape. It’s not.

And what is that going to serve? Are you going to transcribe the entire tape and have it entered in the child’s record? Then why do it? As an advocate, I think your time is better spent getting the data you need to show that your child needs whatever it is you are requesting, especially if your relationship with your district is decent.

Know that many people will view recording an IEP meeting as a hostile act. Put yourself in their shoes for a moment. You think you’re doing a good job. You like your students and think you are serving them well. Then one day Mom walks in and says, “I’m going to be recording this IEP meeting, k?” It’s normal to feel defensive and taken aback. Administrators often see this as a hostile act and that you are trying to catch them doing something wrong (and you might be). But I wouldn’t be doing my readers justice if I didn’t tell you this. Not everyone thinks this is a great idea, so don’t expect to be greeted with warm welcoming smiles after you announce this.

My relationship with my school district can’t possibly get any worse. I’ve been to IEP meetings where people screamed at each other, shoved chairs and left the room in tears (and it wasn’t the parents!). I have been in situations where the relationship with the district really couldn’t get much worse. If you have reasons why you want to record the meeting and you don’t have a relationship at risk, go for it.

It might make it better, as it did for Karin:

I’ve had to record several meetings over the years in my school district- it was THEIR behavior that greatly altered the atmosphere of these meetings, which resulted in me taping at follow- up and/or “to be continued” meetings. The taping was extremely beneficial in each circumstance- not only did school staff behave appropriately and professionally but the meetings were productive.

So it may actually help the situation!

In any event, if you do decide to record your IEP meeting, notify the district when you RSVP to the meeting. At that time, you’ll be asked if you need any accommodations. This would be a good time.

This post was originally published in 2015 but was recently updated. As always, this is meant as advice and guidance and not legal advice. 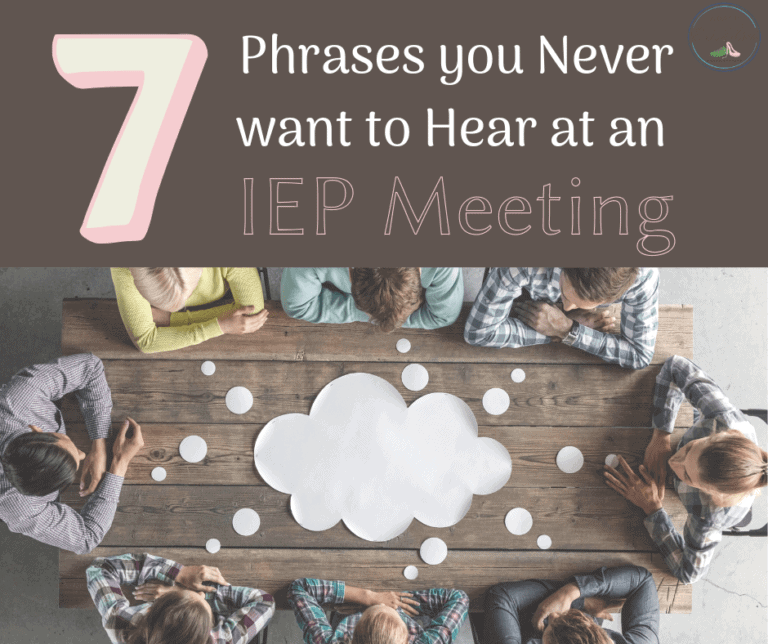 6K Shares 29 16 4.9K More Be on Alert for these phrases at your IEP Meeting. You’re sitting in your IEP meeting. Things seem to be going well. Everyone is pleasant and there’s a constructive conversation. But your gut is telling you that something just isn’t quite right. But, how do you know? Well, after…

247 Shares 119 More When your IEP Meeting is Tomorrow This was in an email I opened this morning: “Hi! I have my IEP meeting later today, please send me any advice you have that you think might be helpful. Thanks.” Now, this is not an unusual email. Actually, several times a week, either via… 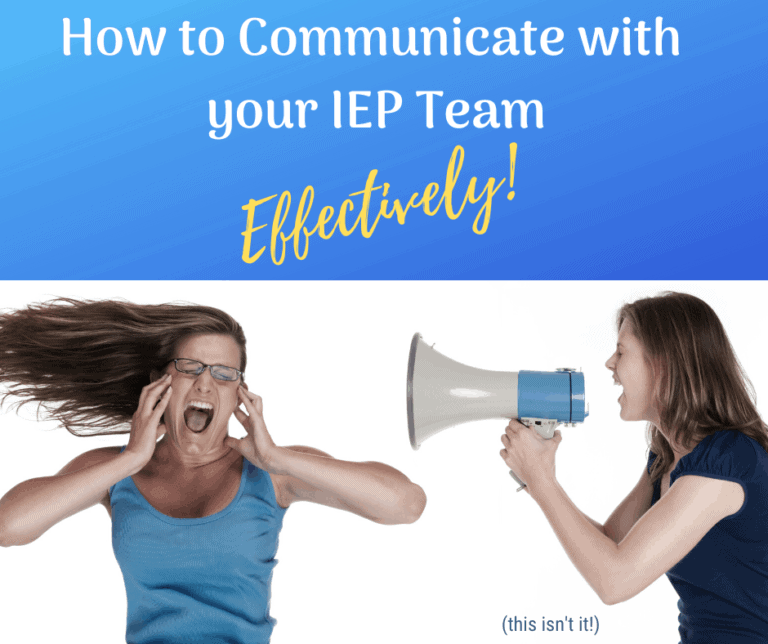 1.1K Shares 450 More How to effectively communicate with your IEP team. There is so much to say about communication in the IEP process, I could ramble all day. But instead of that, I thought that I would focus on the five (six?) Ws-who, what, when, where, why and how. I thought it would be… 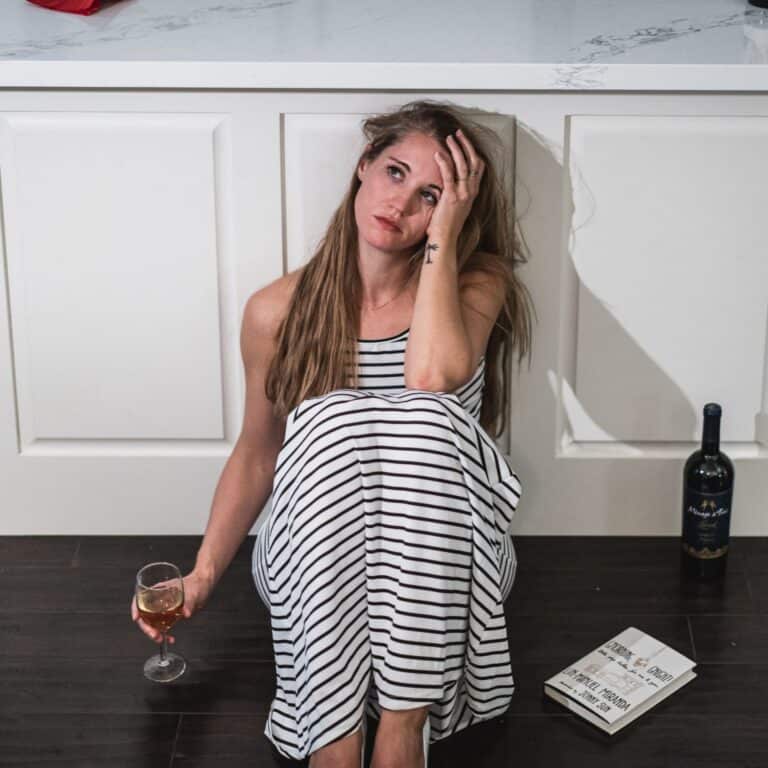 1.4K Shares 786 More How to Stop Stressing over IEP Meetings I was waiting in the lobby. Mom pulled into the parking lot, made her way towards me. “I’m so nervous!” she whispered. “Don’t be. We got this.” And we did. My mind drifted to other parents in our Facebook group who often express similar… 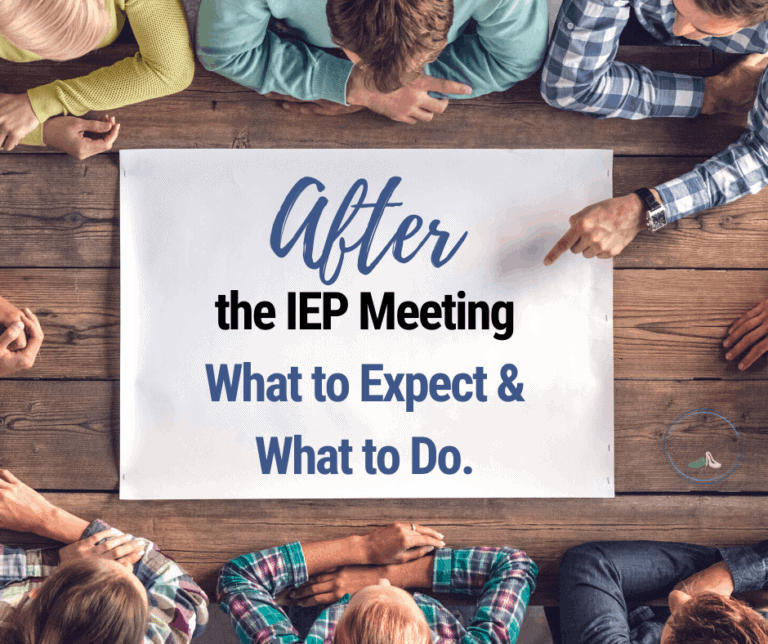 3.5K Shares 12 11 1.8K More AFTER the IEP Meeting It seems that many parents anticipate and prepare for an IEP meeting and then that’s it. Often, it’s very anti-climatic, all that preparing and worrying. And then what? Are you left with this feeling of not being resolved, or not knowing what to expect? Sound… 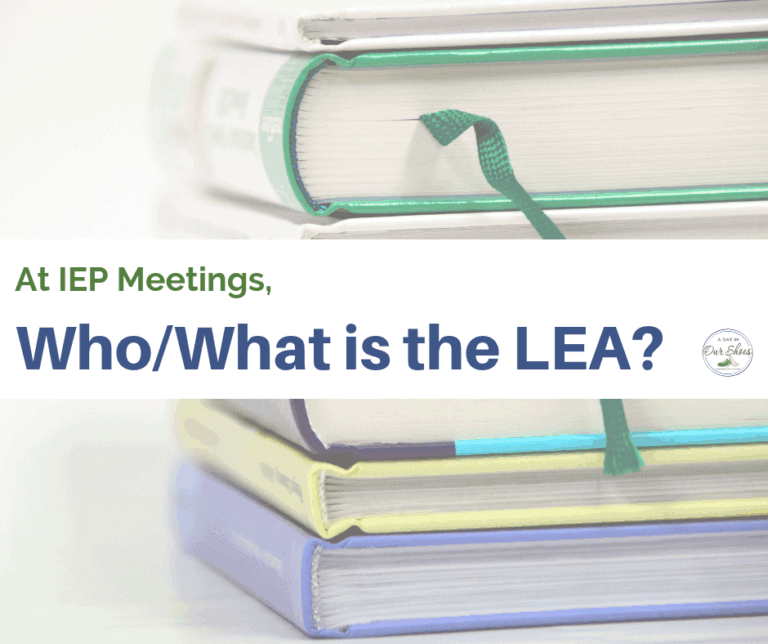 1.5K Shares 11 993 More What does LEA stand for? LEA is one of those special education acronyms that is more complex than it needs to be. The LEA is a largely misunderstood position or role at IEP meetings. Many times, parents want to exclude the LEA from their IEP meeting! In my professional opinion,…