The other day I read a story in the Philly Inquirer and it made me just so sad. If you read the story and then say “Jeez, why didn’t I know about this??” don’t beat yourself up. No one knew. In fact, the title of the article is “The Death No One Cares About.” I was so moved by the article that I emailed the writer who wrote it and asked what I could do. His response, while kind, didn’t offer much other than the option to pass along cards to Christina’s mother. I said that I may do that, and that all that I had to offer was to try to start a social media movement. He admired my passion, but that was about it.

I thought about it over the weekend–and let’s face it, after the winter we’ve had, a sunny and 75-degree day is going to trump any social good movement, right? So I decided to hold off and wait until my Tuesday to-do list, since this is an action item.

#CareAboutChristina Her life mattered-click to see full article on Philly.com.

So what is the story?

Here is a brief recap.

Christina Sankey was an adult living with significant mental and intellectual disabilities. According to the article she was quite low functioning. She had a 1:1 person, someone whose only job was to be with her 7 hours a day and keep track of her.

This 1:1 aide took her to Macy’s in center city…and promptly lost her. Missing persons reports were filed and long story short, she was found dead a few weeks later. Official cause of death is not yet known though hypothermia is expected. And she was topless–and since hypothermia (in later stages) causes you to do crazy things, no one is pursuing the toplessness of her situation, because they think she did it herself.

Except this: Mom says she was so low functioning, that she could not take off her own top.

And as a mom to a child who is also low functioning…that resonates with me. My son, although only 7, cannot take off his own shirt, pants or shoes. So I get it. If I find my son disrobed, I know that he is not capable of doing it. That is suspicious.

But apparently so far, the DA’s or ME’s offices do not think so.

She was not going to set the world on fire. But she was my world.~Christina’s Mom Patricia

So here we are, several weeks after her death. The aide, whose only job was to keep track of her, has barely been questioned. The agency who hired him, nothing. Her exact cause of death is yet to be determined. And meanwhile, a Mom has lost her baby.

I’m tired of society thinking that people with autism or intellectual disabilities do not matter. They matter. Everyone matters. Everyone has value. Christina mattered. And a mom cannot even get back the pictures of her daughter that she gave to the agency when her daughter went missing.

So, I’m asking you to speak up with me and tell the world that Christina’s life mattered.

You can call Casmir Cares at 267.292.3116 and ask them why they won’t at least return the pictures of Christina to her mother instead of referring her to an attorney. You can ask them why they haven’t investigated Hussanatu Wulu, her caretaker.

You can tweet and ask Philly’s DA Seth Williams why he isn’t investigating.

You can also tweet the supervising agency and ask them what they are doing to prevent this from happening again.

[Tweet “.@PhillyRecovery What are you doing to make sure there are no more Christina Sankey incidents? Protect the disabled #CareAboutChristina”]

If you prefer to just retweet, I got you covered!

.@PhillyRecovery What are you doing to make sure there are no more Christina Sankey incidents? Protect the disabled #CareAboutChristina 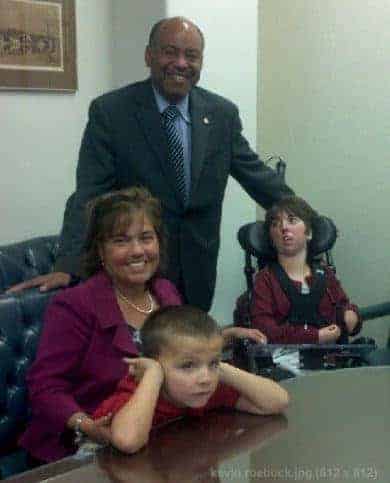 552 Shares 83 More Tips for Raising a Socially Conscious Child I started discussing being charitable last holiday season. My son was then three years old. It began at the grocery stores because they had giving trees or charity trees, or piles of gifts to be given away. He would look at the toys under…